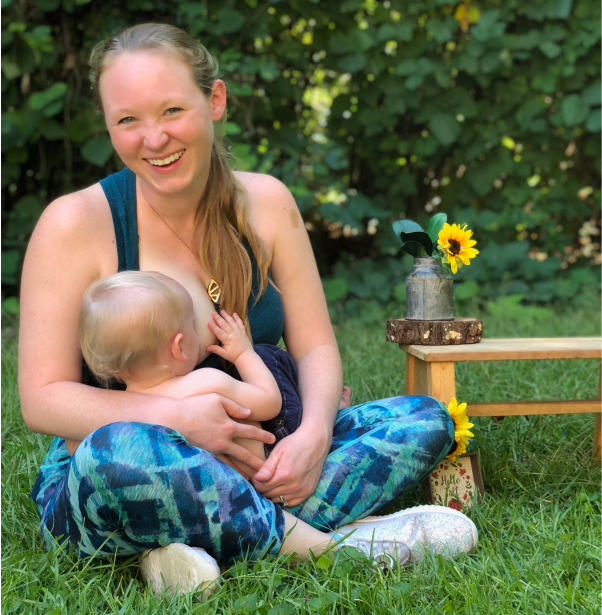 Motherhood is definitely full of some of the most emotional moments in life, both good and bad. A few days after Richard’s birth (good emotional moment), he had a health scare that ended up with a trip to the pediatric ER and a 3-day stay in the pediatric intensive care unit (bad emotional moment). The protocol of tests they had to run on him were traumatic for all of us- EEG, EKG, lumbar punctures (three of those because the first two were unsuccessful)- and they determined he had a low heart rate and low oxygen levels for his age as well as some sort of infection.

By the time we were discharged and made it to his pediatrician, Richard was a week old and had lost 17% of his birth weight. The doctor was not happy, and I felt like he thought it was my fault. My milk supply had tanked, and I needed to supplement with formula. Even though I logically knew this would be good, and Richard would start to gain weight, my emotions told me it was the end of the world.

Something I didn’t know then was that a mom’s worth is not measured in ounces, so I put so much pressure on myself to build my supply back up with supplements and power pumping. It took a little over two months, but I was able to move back to exclusively breastfeeding. The funny thing about that was just as we got the hang of breastfeeding, he was six months old, and it was time to introduce solid foods.

It took us a month of Richard constantly refusing food and a subsequent diagnosis of “failure to thrive” to realize he had some sort of legitimate issue with eating. He didn’t seem to have the mechanics to swallow anything other than breastmilk, Moe’s queso, and Chick-fil-A ice cream and wouldn’t take a bottle anymore. The pediatricians told me I needed to be doing more and offering three meals a day because he needed to gain weight. I knew logically that they were just trying to look out for Richard’s health but emotionally, it felt like they really seemed to think I wasn’t doing enough to offer him food. I think at one point, I was in their office, borderline manic, asking them if they wanted to come to my house and show me how to get him to eat three meals a day. I had to push back and be the one to advocate for him and stand up for myself because I knew I was doing everything I could do.

I put in a self-referral to BabyNet and got in touch with Help Me Grow SC to find people who were going to empathize and be on my side. Because of Richard’s extreme and significant feeding delay, he was able to qualify for free therapy and early intervention services through BabyNet. It was such a validating moment after everything we’d been through.

We began feeding therapy with an OT, and she further validated our concerns and came up with creative ways to get Richard more calories. I prioritized offering all kinds of foods despite knowing he would reject them, and I respected when he would use his hands to sign to me that he was all done eating even if he hadn’t tried to eat anything. I pushed for a referral to a pediatric gastroenterologist who determined there were no GI issues and then finally, after 9 MONTHS of fail to thrive and no weight gain, Richard got a diagnosis from a pediatric Ear, Nose, and Throat doctor. The ENT did a fiberoptic endoscopic evaluation of swallow (FEES) where they stuck a small camera into Richard’s nose and down his throat and saw that he had tons of bumps all over his esophagus and his adenoids were blocking 75% of his airway. It turned out that the damage and swelling had been caused by silent reflux. It was truly “silent” because he’d never shown any signs of reflux or any signs of adenoid enlargement. Luckily, we were able to avoid adenoid surgery because the reflux medicine immediately allowed him to eat anything with no issues. He was 16 months old.

At the end of the day, it’s really up to us to be the ones to advocate for our children and how we parent them. Because of Richard’s experiences, I feel so much more confident as a mom. But I’m also so grateful for our team of pediatricians, OT, and early intervention specialists who are able to help me see past the emotions when I need to to make the right decisions. Now, Richard is almost two and a half, is finally in a percentile and on a curve for his weight for his age, and he is thriving. He skipped the picky toddler stage, and some of his favorite foods are cheese danish, spicy shrimp sushi rolls, and seaweed snacks (good emotional moment). He’s a big brother to a new baby sister, and they both bring so many good emotional moments to our lives.