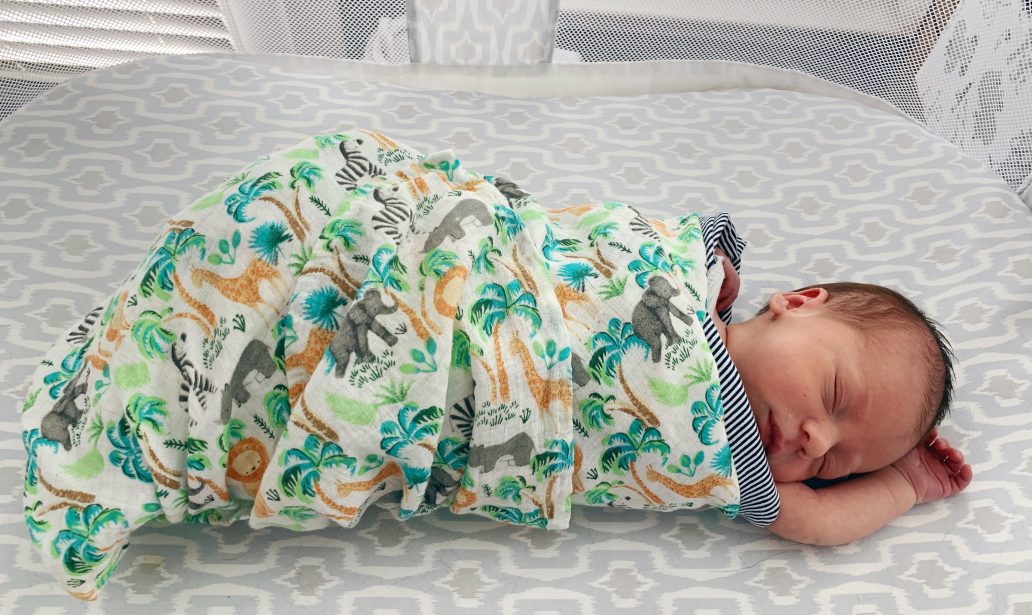 In this post, we are sharing our experience with baby sleep and what worked for us! This is not a guide to what is best or what will magically help your baby.

For us it was important to follow the CDC Guidelines for Safe Sleep. So, both of us used bassinets in our bedroom as soon as we brought Brooks and Lucian home from the hospital. Chloe used this bassinet for Lucian. It was perfect because it was a swing, bouncy seat and bassinet in one which saved space (space is important when you are living in a camper!!). Jennie used this bassinet for Brooks. They loved it because the base was adjustable and was able to adjust to the height of our bed (our bed is tall). I was able to lean over and get Brooks out for nighttime feedings which made things much easier especially early on.

The other big adjustment for the boys was transitioning out of the swaddle. As soon as the boys were rolling over, it was time to transition from the swaddle (These were Lucian’s favorite swaddles, These were Brooks’ favorites.) Lucian transitioned straight to footie pajamas. We figured if he didn’t need anything more, we wouldn’t have to transition again! Brooks transitioned to fleece sleep sacks because we sleep with the thermostat pretty low and didn’t want him to be cold, we then ended up using fleece footed pajamas. We interchangeably used one of these with no issues going between the two, based on what we had clean.

Lucian transitioned to the crib at 6 months. One year is recommended, but for us it made most sense to go ahead and transition. We ALL needed more sleep. Also, there is a lot of differing information out there. We read and listened but ultimately decided this was what was best for our family.

Brooks transitioned to the pack n play in our room at 6 months old and then to his crib at 9 months. His room is on the second floor and our bedroom is on the first so I thought for sure we would wait until 1 year at least but I felt like we were interrupting his sleep when we would come in and get ready for bed at night. So we decided at 9 months old to move him up to his room, we stayed in the spare bedroom upstairs next to his room for a week during this transition. When possible we would put him down for naps in his bassinet, pack n play, or crib so he had a designated sleep space. We also began his naps in his crib around 6 months old as much as possible so he would be use to that space.

Sleeping through the Night

At Lucian’s 6 month appointment, his doctor asked about sleeping through the night. At this point he was still waking every 3 hours to eat. Again, this is different for every baby. Lucian was on track for growth and the doctor encouraged us that his night feedings were not necessary. We did research and decided to try the Ferber method but modified to work for us. Letting him cry that first night was SO hard! I kept thinking about how this was the first time that I knew what he wanted and was choosing not to give it to him. Luckily, Lucian was sleeping through the night by the 3rd night, and that meant mom was too!

Brooks was sleeping through the night early on and I would have to wake him to eat until our pediatrician told us he was at a weight where we no longer needed to wake him up and could let him sleep. He then went through a phase around 5 months where he began waking up every 3 hours and would feed and then go right back to sleep. Now he usually wakes up around 11 or 12 and feeds one more time for the night and then typically sleeps through the night until around 5 or 6 in the morning. I have noticed when he is going through a leap he tends to wake up more during the night to feed but then will lay down and go right back to sleep. Discussing this with our pediatrician her main concern was that when we lay him down he isn’t already asleep and he soothes himself which he does so she said keep doing what we are doing.

8:00ish shower time and teeth brushed (He does shower most nights, but sometimes we skip it for time)
8:20ish Diaper, PJs, Book and Prayers
8:30ish Lovey, Lights, Sound Machine and Bed

7:45ish bath time, we have been doing every other night baths but now that he is more mobile and we are going to parks and getting outside more we have begun doing baths nightly
8:00ish PJs, Play
8:20ish Read, Sing, Feed and Prayers
8:40ish Paci and Bed

Around one year old, we decided to introduce a comfort item for the boys to sleep with. We went back and forth on whether or not to try it. We both decided it was worth a shot and could turn out to be beneficial to help queue bed time and help with self-soothing. Both boys took very well to it and love their little sleep buddies. Lucian has this dragon and Brooks has this monkey!

Every baby is different but one thing that every mom knows: Transitions can be really hard! More than the items we use and sample schedules we included, the best advice we can give is to find moms who you can talk to about these hard transitions. We were both texting our closest mom friends in tears at times trying to make it through. These times aren’t easy but watching your little one grow up and change is totally worth it!