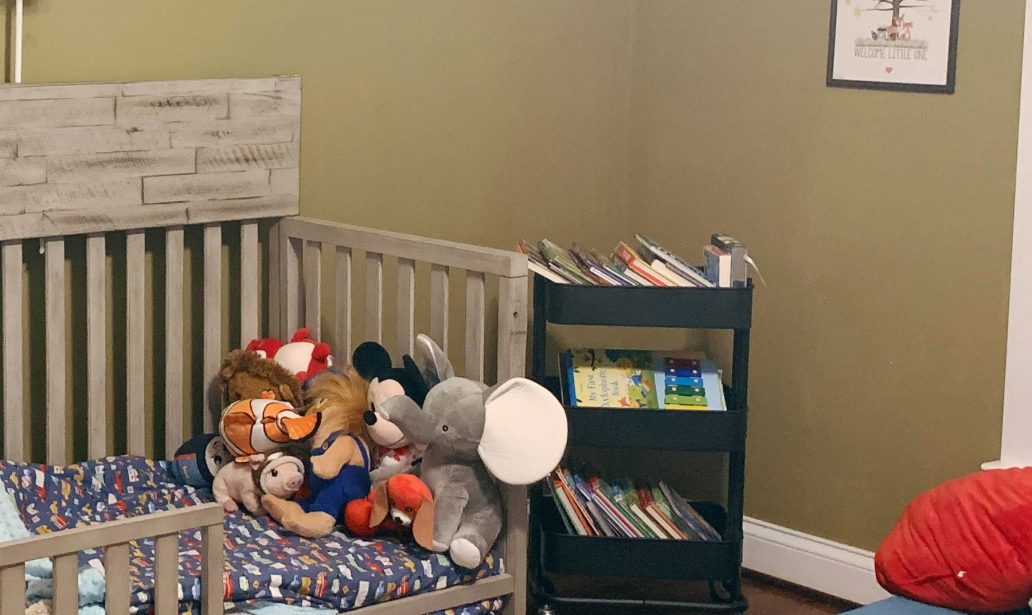 We have both successfully transitioned the boys to their big boy beds/rooms. We have slightly different journeys and how we went about doing this but it went well and both of the boys are doing great with their new beds.

BROOKS: We decided with Little Bug being on the way we would go ahead and transition Brooks to a new room while changing his theme up a little, giving him a new room and new bed, more to come on his new room later! We wanted to do this a couple of months before the baby arrived so he didn’t feel like baby brother was taking his room! We wanted to create a space he would really enjoy and want to be! We started having the conversation with him about the switch a couple of weeks before switching over to the new room and new bed.

We initially switched rooms and left him in his crib for 3 weeks and then once we made the transition to his new room successfully we then removed the crib side and added his toddler bed rail. He was excited to help dad make his bed a big boy bed. Once it was changed he got in and pretended to go to bed. This wasn’t completely without emotions which was expected as this was a lot of change to process! He did great though, a couple of nights when we were going to lay down he would say “no, I need my old bed back” and whined for a few minutes and then he was fine and over it. We did the first run at bedtime. We had talked about doing it at nap time but decided to go ahead and go for it at bedtime instead. It worked well!

The first night was GREAT he slept in there and stayed in there when he woke up. The next 3 mornings he decided to get up between 4:30-6 when he had been waking up between 7:30-8:30. We have the Echo Glow light in his room and set it up with routines: yellow for getting ready for nap/bedtime and it turns yellow 30 minutes before nap/bedtime, blue when it is nap/bedtime, and green when it is time to get up/ come out of his room. We talked about each color and what it meant. On the fourth morning he slept/stayed in his room until 7:30! And since he is waking up/coming out between 6:45-7:30 which is way more acceptable that 4:30 or 5:30 😜! He still is learning his lights and we are having to play with the timing a bit as we learn his new normal.

LUCIAN: We planned to keep Lucian in his crib as long as possible. He NEVER tried to climb out. But I felt like it was time when after months of refusing a blanket, one day he asked for one. I noticed with a blanket, he was laying very still when I laid him down for bed and a nap. I thought it might be a good time to take advantage of how still he was being and start converting him to a bed. We have a really neat bed for him, but it is not ready so we started by just taking the side off of his crib. We put our nugget couch in front just in case!

One day, at nap time, I talked to him about it and then let him help me take off the crib front. I laid him down the same way and told him to stay in his bed and call us when he wakes up. I closed the door, grabbed the monitor and hopped in the tub! A few minutes later, he came RUNNING into the bathroom and said, “Mom, look I got out!” We told him he was supposed to stay in there and offered to take him back. He said “No, I can get in by myself now!” He ran into his room, lay down and fell asleep. It has been months now and he has never gotten back out of his bed. We certainly know that we are lucky!

Of course, there are days that aren’t perfectly by the book. A few times he has needed a little bit of extra comfort or time. And I have had moments where I thought the cuddles sounded pretty good too and he has napped in my bed. But I can count these times on just one or two fingers. Lu is like me and he really likes set expectations to follow. We gave him those and he has thrived. I do think it is a lot about knowing your child and what they need/when they are ready. Now fingers crossed the transition to his next bed is equally as easy!

We feel like the transition has gone GREAT and they are doing well, loving their big boy beds.