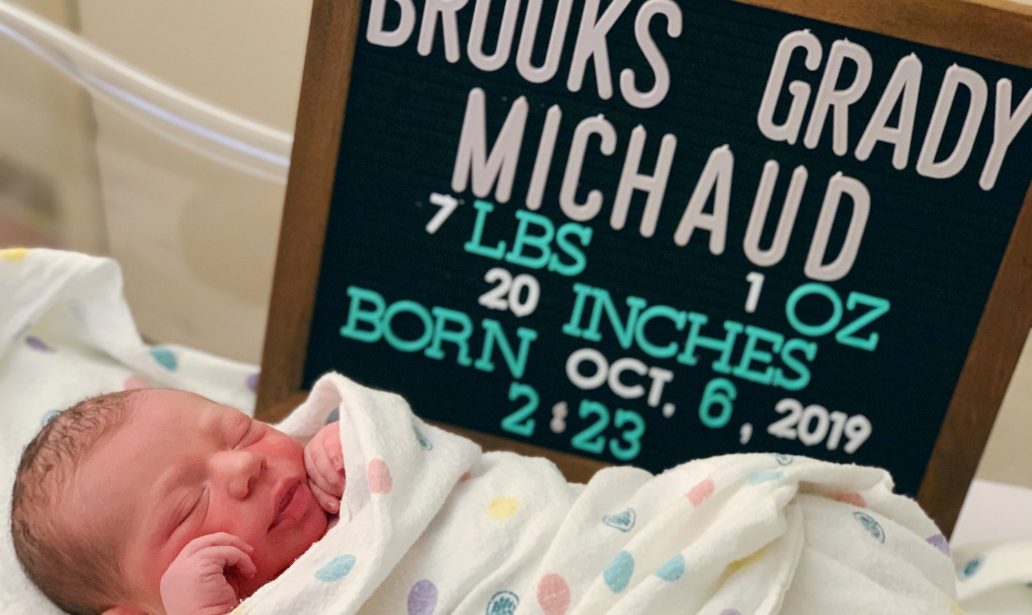 Our journey kicked off when I began having Braxton Hicks more regularly on Wednesday 10/2. I knew it wouldn’t be too much longer before we’d meet our little Peanut!! On Friday 10/4 I went to my final Doctors appointment before Brooks’ arrival. I wasn’t dilated any and was only 50% effaced! I told BJ after that appointment that I felt like this was going to be the weekend we’d meet Brooks.

On Saturday, 10/5 we went to lunch and to walk around the antique mall here in Mooresville. And came back home to rest and relax. I began having stronger contractions around 6. We were waiting for them to be 7 minutes apart before heading to the hospital (45 minutes away). My contractions went from being 10-13 minutes apart to 2-4 minutes apart.

We headed to the hospital where BJ continued to time my contractions on our ride over, they stayed steady at 2-4 minutes apart. He thought he was going to deliver Brooks in the car! My water broke in the car, all I felt was a little pop. I wasn’t 100% sure that’s what happened until I stood up to walk in and started feeling more of a trickle. We made it to the hospital at 9:15 PM. They checked me and I was dilated to a 1 and 90% effaced. Luckily my water had broken or they likely would have sent us back home because I wasn’t in active labor yet.

They began my admission process and then moved us to labor and delivery (L & D)! From there things began to move rather quickly! Regular contractions with back labor, wrapping around! BJ was FANTASTIC, he applied counter pressure to my back so much so the next day I had bruised knuckle imprints on my back but I kept telling him push, push harder! The nurse helping me after labor said “yea, I’d say he was applying counter pressure, you have bruises to prove it.”

The first time they checked me in L & D I was already dilated to a 5 and the 2nd time I was at a 7. Within minutes my body began to push on its own. Our Doctor was in surgery and the nurse said “if you can control it, don’t push.” I sat up to try and keep from pushing as much as possible!

My nurse looked at me when I told her my body was pushing and said “well it may be me and you.” I told her I trusted her 100% and we’d get through it! The laborist finally came in and ended up delivering Brooks but my nurse and I wasn’t sure she would make it. I pushed 4-5 times. I kicked my legs out when his head crowned (involuntarily, my body just did it) which caused 2 bilateral tears. Brooks made his appearance at 2:23 AM on 10/6!

From start to finish I labored 5 hours and 8 minutes, without an epidural, which I hoped to be able to do, so glad I was able to! BJ said it looked like a war zone in there from where I tore, they stitched me up for about an hour and a half while I had Brooks on my chest where you see him above.

This was the start of his breastfeeding journey, he ate the entire time they stitched me up and ate for a solid 2-3 hours before they got his birth weight and measurements!! He also had 7 poopy diapers in the first 12 hours. Brooks was due on October 9th but was born 3 days early on October 6th. We couldn’t have been happier to meet him!