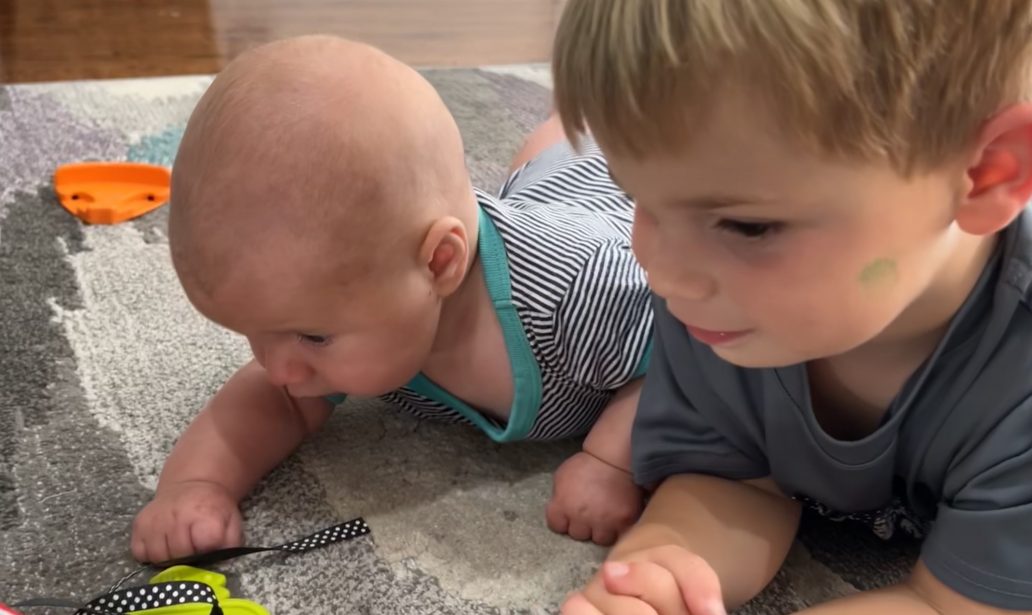 Brooks is rocking this big brother thing! Over the past four months he has been the BEST Big Brother! He transitioned to being a big brother so so well! Of course we had some big emotions and still do some days as we understand the ever changing role of big brother and how things change when adding a sibling (having to wait, not having all the attention, etc.). He has done so great though the big emotions when they come have been directed at myself and BJ, not at Sawyer.

Every chance he gets he is loving, snugging, and holding Sawyer. He loves checking on him and talking to him, he calls him Sawyer Buddy. If Sawyer is upset Brooks rushes over to comfort him and give him his paci, it is the sweetest thing to see!

The older and more interactive Sawyer is becoming the more fun it is to watch these two boys together! I mean check back in when Sawyer is more mobile and deciding Brooks’ toys are his 😜 and when all the sibling rivalry begins! I think a few of the things that helped the transition go as smoothly as it did for us: talked about it A LOT, read books about becoming a big brother and what that meant, transitioned Brooks to a big boy room months before Sawyer came so it wouldn’t be like Sawyer was taking his room, when we were home with Sawyer we made sure that BJ and I both took moments to solely focus and play with Brooks undistracted! We have done a lot of apologies and I have allowed Brooks to see my flaws and raw moments too!

Mama if you are getting ready to become a mama of multiples and are having doubts or questions about how you will do it: it will be okay, better than okay it will be GREAT with time but give everyone time to adjust! During the hard moments give yourself grace, stop take a breath and be willing to apologize when needed!