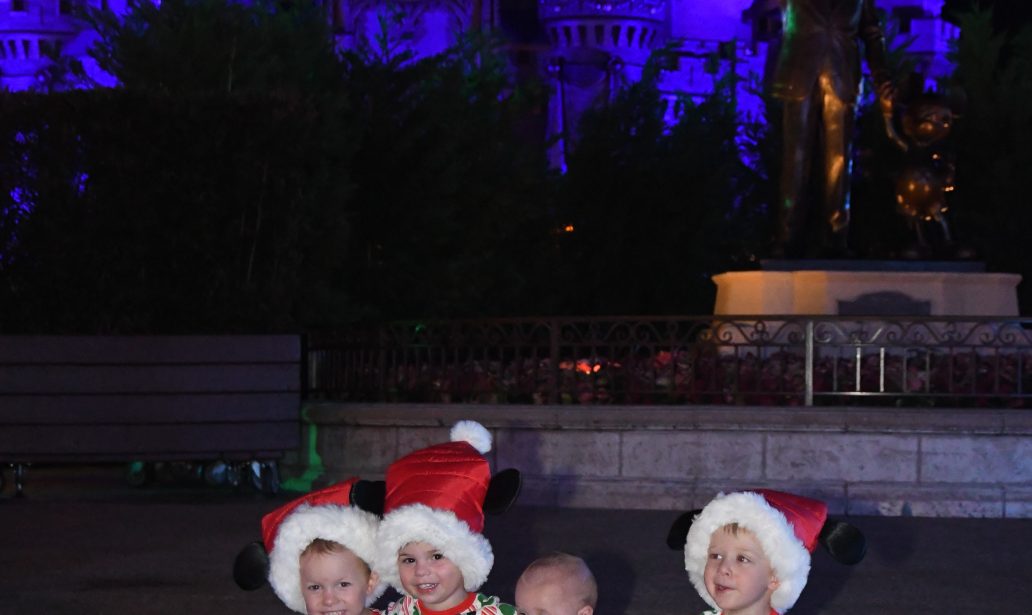 When we got pregnant with the boys, we said we would take them to Disney when they turned 3. Then all of a sudden, they turned three! So, we took the boys to Disney this year. When we started planning, we wanted to go in the Fall, after Brooks had turned 3. After doing some research, we realized if we went in the second week of November, Christmas decorations would already be up. Once we started planning, we decided to add on the Christmas Party too. And we are so glad that we did.

We did a split stay with our resorts. We knew we wanted to stay on property since if we couldn’t use Disney transportation, we would need 4 carseats and take at least two cars. We wanted to spend a couple of nights at Animal Kingdom Lodge, but also didn’t want to pay the bill for spending a whole week there. So, we split between AKL and Port Orleans Resort Riverside. We really loved both places. Both resorts have awesome pools and splash pad areas. AKL probably has the best pool! They both have great food, we loved the cajun food at Boatwrights and the food at Sanaa to go. If you end up at Port Orleans, don’t skip out on the Mickey-shaped beignets. Of course, you can’t beat the hotel decor and animal views from your balcony at Animal Kingdom Lodge. We also loved the swampy paths, the boat ride to Disney Springs and the more quiet feel of Port Orleans.

We did a 6 night trip with tickets to each park and the Christmas Party. We rope-dropped each morning and used Genie plus and the whole group agreed, we wouldn’t do it any differently next time! These two combined, made it so that we did not miss any rides we wanted (I will add that since we had so many 3 year old, we didn’t ride many rides that they couldn’t). Jennie and BJ brought their double BOB jogging stroller and we rented one to share with a friend. The rental process was so smooth!

Though we hoped to be past the hurricanes going in November, we ended up there during a hurricane. It rained almost every minute of our trip. The first day, it wasn’t forecasted, so we really were not prepared. But the rest of the trip, we were covered in rain gear and we had a blast even though it was raining!! The boys wore their rain jackets, splashed in the puddles and the strollers were covered. We used clear shower curtains and a bungee to cover the strollers and this was a game changer! We even had people stopping us in the park to ask us about it, so they could do that too. Jennie and I had these ponchos and loved them. I wore a rain jacket under mine for more protection and some warmth.

At Animal Kingdom, the boys loved the safari and checking out both the animals and their maps! The Lion King show was also a huge hit. This park is where we spent the least amount of time, because we weren’t prepared for the rain and we got DRENCHED! But we made the best of the day and headed back to the pool, for some more rain… 😉

At Magic Kingdom, the boys really loved the carousel, Dumbo, the magic carpets and Jingle Cruise. Pirate of the Caribbean, Peter Pan and Buzz Lightyear were favorites of the adults. We spent a full day here (minus an early closure due to the hurricane). Due to the hurricane closure, they didn’t do fireworks so we were so happy to know we would be back for the Party. We ate lunch with Pooh and his crew. Brooks and Owen loved hugging and visiting with the characters, but Lucian enjoyed watching from a distance and waving!

At Hollywood Studios, the boys enjoyed the Cars show, Disney Jr LIVE, Alien Saucers and the Toy Story Ride. This park opened late due to the hurricane and we waited over an hour for a bus too, so we didn’t have as much time this day! But we still had time for tons of fun!!

Epcot was our last day and our only day not in the rain. It was the only weekend day that we spent at the parks and it was a holiday weekend as well as close to the end of the Food and Wine Festival. And it was PACKED. This was by far the most crowded park during our trip, but we still had a great time and found lots of little spots to tuck in for a break from the crowds. We all got to eat lots of good food and drinks some yummy drinks. The boys loved the Nemo ride and the talk with Crush. We adults really enjoyed Soarin’, Remy’s and of course, Guardians of the Galaxy: Cosmic Rewind. The fireworks were beautiful. We also at dinner at Space 220, which was a splurge but a really neat opportunity and immersive experience!

The Christmas Party was truly amazing. It was expensive, but it was a beautiful night and so memorable. We were able to switch our party tickets to the only night that it didn’t rain, so we were able to enjoy the party without our ponchos! We also, wouldn’t have been able to see any Magic Kingdom fireworks without it. And this fireworks show is amazing! The cookie and hot chocolate were amazing too. We made sure to hit every cookie stop. Oh and the parade! The parade may have been the best part, we saw so many of our favorite characters. The floats and costumes were amazing and the floats even had scents! We didn’t do many rides, but we were able to walk straight onto the ones we did ride, since the crowds were so much lower.

Overall, we had the best time making memories with our friends. We feel so grateful to all have kiddos about the same ages and to get to watch all of them growing up together. The magic of Disney was a great way to celebrate the youngest boys all being three. We talked about maybe doing a more relaxing trip next time, but we will definitely be back!