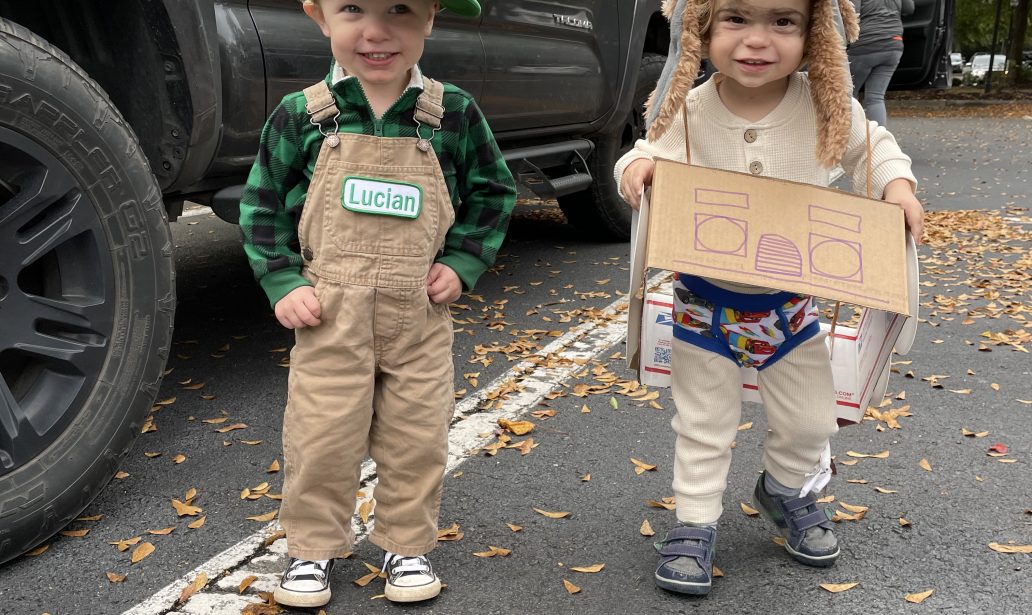 We had so much fun getting the boys’ costumes ready for Halloween this year. We have gotten our boys and their other same-age buddy together every year for Halloween. This was our first year really taking them all out and it was a blast! We went to the Halloween Celebration at Birkdale Village and then went trick-or-treating on Halloween night.

Lucian, like most toddlers, is obsessed with garbage trucks. We narrowed it down to three ideas and asked him, when “trash truck driver” was a choice, the other choices had no chance! Lance built his little truck in just two hours, using things we had laying around the garage. Then, Lucian and I painted it and added the logos. Lucian was able to sit in the front or stand in the back. We used a tiny trashcan as his candy bucket. For the actual costume he wore, I grabbed the sweatshirt at Walmart. He had the overalls in his closet and then, I just ordered the embroidered name badge and hat from Amazon. Lance and I had to think hard about how to coordinate our costumes with a trash truck driver, so we went with things that love trash. Lance, the fly and me, the raccoon.

Brooks also LOVES garbage trucks and is obsessed with the Trash Truck show on Netflix! He has been requesting specific episodes to watch and one he asks for over and over is Trashimal so we decided to do his costume as the Trashimal this year. He LOVED it, he would say Trashimal and then Honk Honk like Hank does on the show or growl like he does on the show! I went as Ms Mona and BJ went as Trash Truck, it was so much fun! We ordered the nude colored outfit and hat from Amazon. Then I used brown eye pencil to make his mask and we made his trash truck out of a cardboard box, paper plates, and markers. For his tail we used, pipe cleaner, an old white t-shirt, and feathers.

We look forward to celebrating with our friends! And are so glad this is a tradition we have made together!