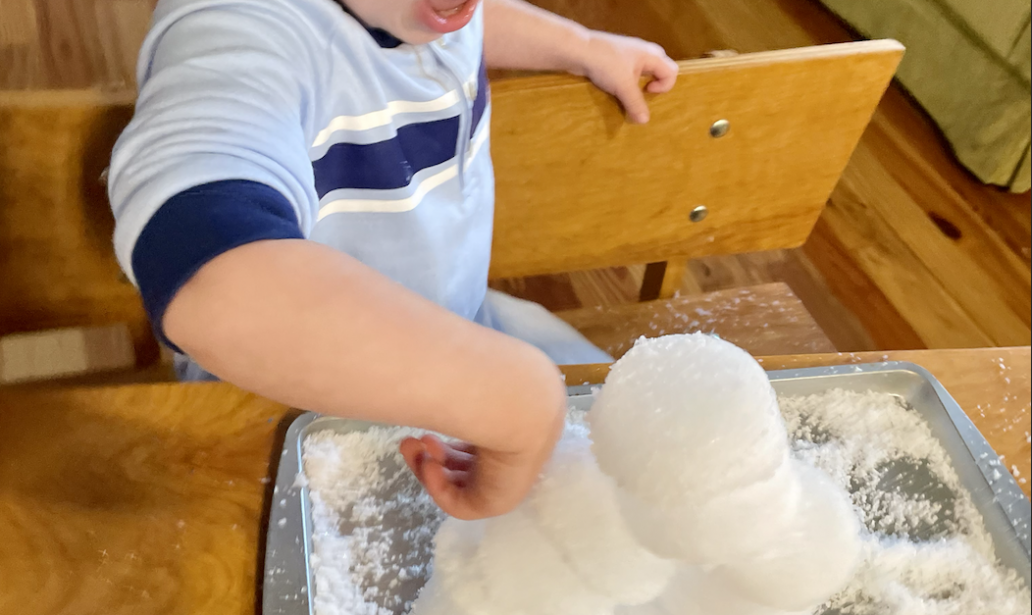 We LOVE Instasnow!! In my last job, Instasnow was a winter staple! It is now a winter staple for our family. Lu loves the real snow and when we introduced him to fake snow, it was an instant hit. Here are a few way you can play with it:

Quick sensory bin: Just add water and snow powder to a small bin, and let your little one grab his/her favorite characters or vehicles and let the fun begin! Of course, you can add winter animals, but we don’t have any of these yet, so Batman and Robin it is!

Shapes, Letters and Line Making: Lu loves practicing making lines and circles, so we used a little bit of snow on a cookie sheet to practice. We tried lines, circles, triangles and I showed him the letters of his name

Igloo Building: I added extra water to some Instasnow in the bottoms of a muffin pan and put them in the freezer. Lu used them to build and play with! He didn’t love how cold they were, so he did a lot of knocking down and I did a lot of igloo building. You can also use ice cube trays for freezing the snow!

Rainbow Snow: Making the rainbow snow was a big hit for Lucian, he loves watching the snow grow when added to the colored water. We just added food coloring to the water before adding the Instasnow powder.

Go out and buy some Instasnow, you will not be disappointed! Check out this video to see it in action! You can buy it at Target, Walmart and on Amazon too.

Tag us on social media if you play with some Instasnow this year!