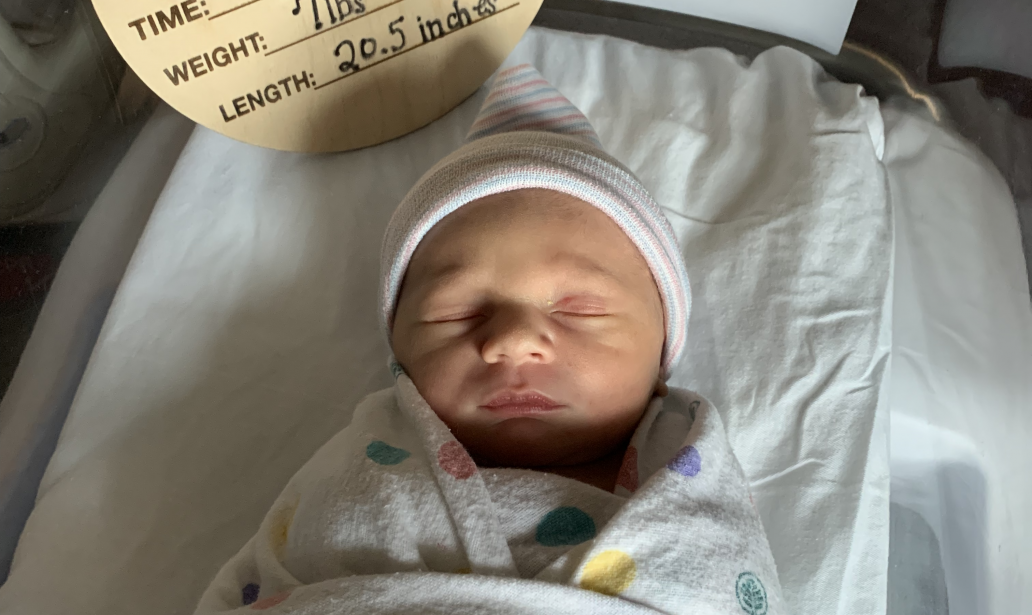 Our Lucky Charm was born on March 18, 2022 at 8:40 AM! Things don’t always go according to plan with labor and delivery, that is okay!

Sawyer’s original due date was 3/19/22. At our first ultrasound they changed his due date to 3/27/22. I felt the whole pregnancy that he would come closer to the 3/19 due date. I started to feel this way even more as they began to tell me he was measuring big at scans. Due to how big (over 9 pounds) they were projecting him to be, they scheduled induction for 3/25. At my final scan on 3/8 based on the scan they were projecting that Sawyer was already 8.5 pounds. I was hoping and praying that I would go closer to my original due date so labor could happen on Sawyer’s timing!

I was considered a geriatric pregnancy 🤪 so after my first scan all of the ones to follow were at maternal fetal medicine instead of my OB office. The only things that I experienced differently having go to Maternal Fetal Medicine was we had genetic counseling and more genetic screening offered along with more scans.

We were all down at the dock feeding the fish the evening of 3/17 and when I stood up I told BJ “um, I really need to go pee.” All of the sudden a huge gush of fluid (like what you see on the movies) happened and I was said “um, my water just broke!” BJ responded with “Are you serious?” I said “Yea, pretty sure!” I went ahead came up leaking fluid ALL THE WAY up from the lake. Got to the restroom to find the fluid was a greenish brown color and knew that likely meant Sawyer had pooped in utero, I also knew from my appointments that this meant I needed to head on to the hospital even though I hadn’t had any other signs of labor so they could monitor me for infection. I called the doctors office and we headed to the hospital. Brooks came very quick and with this being the second baby the doctors had told us not to wait and head in at the first sign of labor, to call and they would let the hospital know we were coming. I couldn’t have been happier that my labor started on its own!

Once my water broke I began having contractions, on the way to the hospital they began to become more regular. We were checked in by 7:07 PM on 3/17. I was only 1 CM dilated and 60% effaced exactly what I have been at my last appointment on 3/14 with only 10% more effacement. They had me collect a urine sample after getting checked in and back to triage they didn’t even test it for my water breaking because of the yellowish green color. At 11 PM I was only 2 CM, the doctor had to come in and check me and she sat on the edge of my bed and had a heart to heart with me about the epidural. At first I wasn’t hearing her because I thought this is her agenda, but she got through to me and showed me she was trying to have my best interest in mind and then I was able to hear her! At 11:30 I decided to go ahead with IV pain medication because my contractions were fairly close together and very painful! This made me very sleepy and I felt very loopy, I did not like the way this made me feel. I was able to rest some. Once this medication wore off the pain was much worse! My contractions had begun to slow down but when they came the pain was severe!

Brooks’ labor and delivery went so fast and this one even though expected to go quicker being the second was not going quickly. I decided to go ahead and get the epidural (even though it was not part of my birth plan) around 2 AM, I had to have 2 bags of IV fluids pushed through before I was able to get the epidural. The nurse got me prepped so as soon as that was completed I could get the epidural. Around 3 AM the anesthesiologist came in to do the epidural I was very nervous about getting the epidural and that was why I went natural with Brooks and planned to do it again! It wasn’t until he put the needle in and didn’t like the placement and had to do it a second time that I was able to put my finger on exactly what it was that made me not want to get an epidural to start with. Now I knew but I also knew it was already happening so stayed calm and luckily on the second attempt he got it where he wanted and it was successful!

They gave me a small dose to watch for reactions and to make sure it was doing what it was suppose to. she wiped me with a wipe on my face and I remember thinking ummm I hope I can feel my face 😂! She said “you could feel that right?” I said “yes!” She said okay good and then worked her way down to make sure the dosage was working.

They had a nurse and DR shift change and shortly after meeting my new team things began to progress, my contractions were still further apart but due to their strength even with them being spread out they were still allowing my body to progress and further dilate and efface. They had discussed possibly starting a pitocin drip if my body didn’t begin progressing on it’s own. That is what my body needed to hear because right after is when I began to dilate further and once in active labor things progressed quickly. By 8:20 I was ready to begin pushing. I was able to feel pressure and know when I needed to push and the doctors watched my contractions and allowed me to push when I felt pressure. I pushed about 6 times and Sawyer was here. Sawyer weighed 7 pounds 3 ounces and was 20.5 inches long. I did not have any tearing and within a couple of hours of having him was able to walk to the restroom and pee on my own!

Going into this labor I had mental blocks that I now know likely affected this labor, causing it to be longer and slower. We were so ready to meet Sawyer but there were so many more layers this time around. We were both away from Brooks at the same time for the first time! How was Brooks going to adjust to being a big brother and having to share mom & dad? I took the Natural Series Mommy Labor Nurse course to help clear some of the mental blocks I had and it definitely helped work through some things. The whole section on induction was very helpful once the induction was scheduled. Also the course was great at talking through changing things up and helped me be okay with changing my plan up when I needed to!

Mama If you take anything away from this, please know: