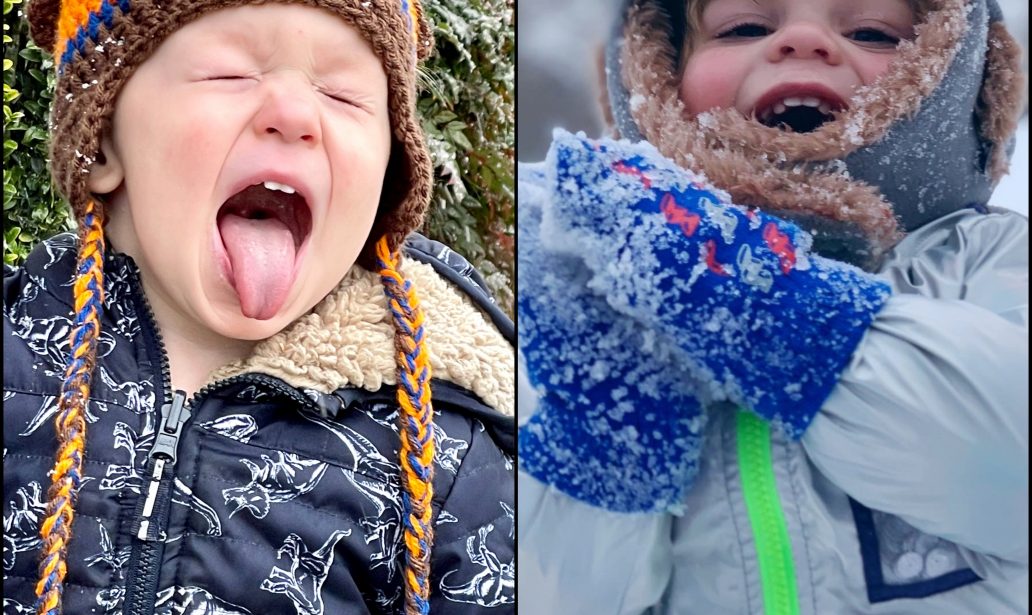 With the snow day we decided it would be a GREAT time to highlight the FUN we had with our boys out in the snow and share how we bundle them up!

Brooks LOVED the snow and has had so much FUN out playing in it! He has really enjoyed sledding, throwing snowballs, playing monsters in the snow, making a little snowman (no picture of this because Brooks immediately wanted to CRUSH it 😂 ), making snow cream, and being together as a family! It has been so much fun watching him run, play, and just really LOVE being out in the snow!

Lucian’s favorite part of snow was the snowballs, he kept asking us to make them for him and loved throwing them, stomping them and putting them on people! He also really loved playing with his cars in the snow, talk about some great sensory play! Lucian also loved catching snowflakes on his tongue. His Nana had told him about it, and as soon as he walked out of the house, his tongue was out and ready! Then, we made snow cream and Lucian ate two bowls!

Here is the snow cream recipe we used! It was a big hit for the kids and the adults. Also, the scooping, measuring and mixing made for a great snow day activity when we needed a break inside!

As Far As Bundling Goes:

Last year when they called for snow we got Brooks these snow bibs on Amazon, we got them a size bigger than what he needed and it worked perfectly because we were able to use them for the dusting we got last year, also when it was really cold for Stroller Strides classes, and again this year for the snow. I plan to do this each time he needs a new pair in hopes that we will be able to use them more this way (it may not always work but figure it is worth a shot)!

I usually layer him with a pair of fleece pants, a long sleeve shirt, a hoodie, two pair of socks, then put his snow bibs on, then add a thicker jacket (fleece lined or something similar), then put on his rain jacket over the top of that to help with waterproofing so he doesn’t end up wet & cold (because YUCK 🥶 who wants that?)! Then we add his winter boots we also got from Amazon, and gloves (we had a pair of snow gloves but couldn’t find them this year so we layered two pair of gloves and it worked GREAT! The outer gloves were wet when took them off but the inner ones were completely dry! Then lastly we add a hat, we use this one from Amazon a good bit! You could also bundle like this on cold days to play outside without the snow with or without the waterproofing, it can add another layer of warmth when needed!

We were not as prepared for the snow, since we were on vacation, but we did have Lucian’s fleece lined jeans from Old Navy! And his FeFe made him the cutest Paw Patrol hat and mittens, so he loved wearing those to bundle up!